Of Fear and Strangers: A History of Xenophobia

Over the last few years, it has been impossible to ignore the steady resurgence of xenophobia. The European migrant crisis and immigration from Central America to the United States have placed Western advocates of globalization on the defensive, and a ‘New Xenophobia’ seems to have emerged out of nowhere. George Makari and Stephen Frosh discuss how we can better understand the problem that is so crucial to our troubled times.

In his fascinating new study, published this autumn, George Makari traces the history of xenophobia from its origins to the present day. Often perceived as an ancient word for a timeless problem, ‘xenophobia’ was in fact only coined a century ago, tied to heated and formative Western debates over nationalism, globalization, race and immigration. From Richard Wright to Sigmund Freud, Jean-Paul Sartre and Simone de Beauvoir, writers and thinkers have long grappled with this most dangerous of phobias.

Historian and psychiatrist George Makari is the Director of the DeWitt Wallace Institute of Psychiatry: History, Policy, and the Arts, and Professor of Psychiatry at Weill-Cornell Medical College. For over two decades he has led efforts to integrate humanistic scholarship into mind/brain medicine and science. Of Fear and Strangers:  A History of Xenophobia (W.W Norton and Yale University Press, 2021), his third book, was preceded by two widely acclaimed histories, Soul Machine: The Invention of the Modern Mind (W.W Norton, 2015) and Revolution in Mind: The Creation of Psychoanalysis (HarperCollins, 2008). His opinion pieces and essays have appeared in the New York Times, the Los Angeles Review of Books, The Boston Globe, and Time.

Stephen Frosh is a clinical psychologist and a Professor of Psychology at Birkbeck, University of London. He has helped to establish the new discipline of psychosocial studies, especially through considering the psychological, social and cultural applications of psychoanalytic theory. He has published  widely on issues of gender and identity and their relationship to developments in social life, and more recently, to questions of otherness and racist hate. His latest book, Those Who Come After: Postmemory, Acknowledgement and Forgiveness (Palgrave Macmillan, 2019) explores the legacies of violence and suffering, especially in relation to questions of witnessing and forgiveness.

Play: Of Fear and Strangers: A History of Xenophobia 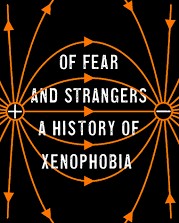