A Conversation on Racial Antisemitism

In collaboration with The Wiener Holocaust Library

As concerns grow about a resurgence of antisemitic beliefs today, and in the context of current debates about race and racism, this is a timely conversation.

Professor David Feldman is Director of the Pears Institute for the study of Antisemitism at Birkbeck, University of London where he is also a Professor of History. His publications include Englishmen and Jews. Social Relations and Political Culture, 1840-1914 (Yale University Press, 1994) and, most recently, Boycotts Past and Present: From the American Revolution to the Boycott of Israel (Palgrave, 2019.) His writing on contemporary antisemitism has appeared in The Guardian, Financial Times, Haaretz, History Workshop Online, The Independent and The Political Quarterly.

Professor Stefanie Schüler-Springorum is Director of the Centre for Research on Antisemitism, Technical University, Berlin, Co-Director of the Selma-Stern-Centre for Jewish Studies in Berlin and Director of the Berlin branch of the Centre for Research on Social Cohesion. Her fields of research include Jewish, German and Spanish history.  Her recent publications include: Ethnonationalism, Antisemitism and Racism in Trump’s America (ed. with N. and M. Zadoff and H. Paul), (Universitätsverlag Winter 2020) and ‘Gender and the Politics of Anti-Semitism’, American Historical Review 123, 2018.

This event is part of The Wiener Holocaust Library’s series on Racism, Antisemitism, Colonialism and Genocide.

Play: A Conversation on Racial Antisemitism 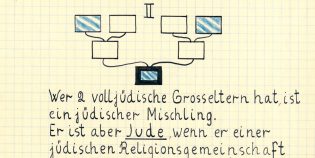 Schoolwork produced in Nazi Germany representing the antisemitic and racist Nuremberg Laws of 1935.