After Liberation – Legacies of the Nazi Concentration Camps

Public lecture hosted by the Pears Institute for the study of Antisemitism, Birkbeck, University of London as part of the Beyond Camps and Forced Labour Conference

On the 29 April 1945 US troops entered the grounds of Dachau concentration camp, near Munich, where they found 32,000 inmates from over 30 European nations. Among them was Edgar Kupfer, a 39-year-old German political prisoner. A few hours after his liberation, Kupfer noted in his diary: ‘I shall celebrate this all my life as a second birthday, as the day, when I received the gift of life anew.’

In this lecture, Professor Wachsmann will explore the second life of Edgar Kupfer and the lives of others who survived the concentration camps, estimated at up to half a million people. In particular, he will consider the first months and years after liberation, looking at the fate of survivors, at the testimony and memory of the camps, and at the punishment of perpetrators. He will conclude by looking at the legacy of the camps since the 1950s.

Nikolaus Wachsmann is Professor in Modern European History at Birkbeck. He has written widely on race, discipline and punishment in modern Germany, with a special focus on the Third Reich. His books include the prize-winning monograph Hitler’s Prisons (Yale University Press, 2004) and Concentration Camps in Nazi Germany: The New Histories, co-edited with Jane Caplan (Routledge, 2010). His comprehensive history of the SS concentration camps will appear in April 2015.

This public lecture, hosted by the Pears Institute for the study of Antisemitism, forms part of the Beyond Camps and Forced Labour Conference, organised by Birkbeck, University of London, Royal Holloway, University of London, University of Wolverhampton, in association with Imperial War Museums, and the Foundation ‘Remembrance, Responsibility and Future’ (Stiftung EVZ)  Full details can be found here. 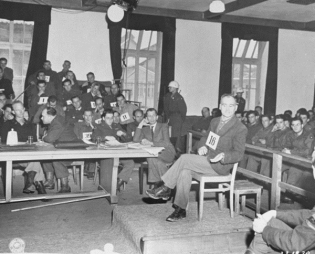