After the Holocaust: Challenging the Myth of Silence

Over the last decade scholars have begun to question the commonplace idea that the Holocaust was not talked about extensively or represented in mainstream culture until well into the 1970s. David Cesarani’s bold new book, co-edited with Eric Sundquist, After the Holocaust: Challenging the Myth of Silence mounts a full scale assault on this reading of the past and, controversially, the claims for a post-war ‘silence’ on which the idea of a ‘Holocaust industry’ rests. The first published collection of original research into this period, international in scope and varied in terms of approach, it opens the way for a sweeping reassessment of Jewish life in the post-war era. The authors reveal that far from lapsing into silence, individual survivors, survivor-scholars, researchers, historical commissions, theatre directors and film makers did respond to the destruction of the European Jews. Other Jews, however, did flee from Jewish identity and some, especially in the USA, simply failed to comprehend the scale of the catastrophe.

Taking David Cesarani’s book as the starting point, Mary Fulbrook, one of Britain’s foremost historians of Germany and the Nazi era, and internationally renowned writer and academic Eva Hoffman, whose writings have explored memory, history and the legacy of the Holocaust, will discuss the evidence for ‘silence’ and probe the counter-evidence. 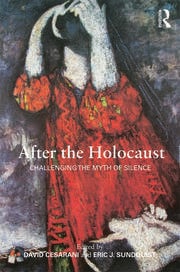