Antisemitism and the Left in the Russian Revolution

When the Bolsheviks came to power in 1917, they announced the overthrow of a world scarred by exploitation and domination. In the very moment of revolution, however, these sentiments were put to the test as antisemitic pogroms swept the former Pale of Settlement.

Based on his new book Antisemitism and the Russian Revolution, Dr Brendan McGeever examines the Bolshevik response to this unprecedented wave of antisemitism. He reveals the campaign to have been led by a group of Jewish radicals – Bundists and Marxist-Zionists – who mobilized around a Jewish political subjectivity. By examining pogroms committed by the Red Army, McGeever also reveals the explosive overlap between revolutionary politics and antisemitism, and the capacity for class to become racialized in a moment of crisis.

Dr Brendan McGeever is Lecturer in the Sociology of Racialization and Antisemitism at Birkbeck, University of London and a Research Associate at the Pears Institute. His book Antisemitism and the Russian Revolution (Cambridge University Press, 2019) was awarded the 2020 Reginald Zelnik Book Prize for History, and an ‘Honourable Mention’ for the W. Bruce Lincoln Prize. He is a 2019 BBC/AHRC ‘New Generation Thinker’. 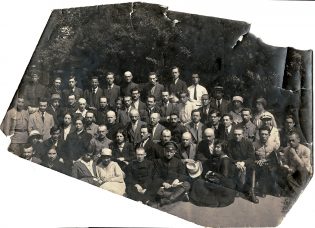