Antisemitism, ‘Volksgemeinschaft’ and Violence: Inclusion and Exclusion in Nazi Germany

The idea of the Volksgemeinschaft  – the national community, was already widespread during the Weimar Republic. Right-wing political rhetoric gave centre stage to the inclusion of all Germans. However, the creation of sharply defined boundaries excluding people outside the national community was the principle method by which the National Socialists established the Volksgemeinschaft. By definition the Nazi Volkgemeinschaft barred all Jewish Germans. From the very start, National Socialist politics included the exercise of violence: it was antisemitism in action. Violence – and violence against Jews – was a visible expression of the Volksgemeinschaft.

Michael Wildt is Professor of Modern German History at Humboldt University, Berlin and a renowned scholar on Nazi Germany. He is the author of Hitler’s Volksgemeinschaft and the Dynamics of Racial Exclusion: Violence Against Jews in Provincial Germany (Berghan, 2012). 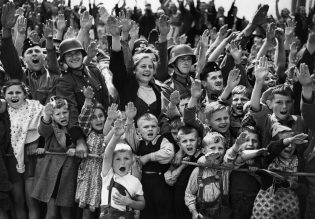