Boycotts – Past and Present

International Consortium for Research on Antisemitism and Racism, hosted by the Pears Institute for the study of Antisemitism

This three-day international conference will examine boycotts in the longue durée, seeking to gain deeper understanding of the development of these movements and their efforts to weaken, ostracize and delegitimize specific institutions, polities and states.

Topics under consideration include: activism against slavery; the bus boycotts of America; marketplace nationalism; anti-Jewish and anti-Nazi boycotts; modern consumer boycotts; anti-apartheid campaigns; localism and global activism; the legal and ethical perspectives on boycotts; as well as the current Boycott, Divestment and Sanctions (BDS) movement.

This wide-ranging conference will explore the history of boycott movements in their own right and at the same time examine the two quite different narratives put forward by proponents and opponents of the BDS movement directed against Israel: one which places the movement within a long history of struggles for ‘human rights’; the other which views BDS as the latest iteration of an antisemitic tradition.

This unique and timely conference brings together over 25 speakers from various disciplines: political scientists, sociologists, historians and legal scholars. In so doing, the conference seeks to create an academic forum to better comprehend the causes and content of boycott movements and to advance understanding of whether and how BDS sits within the debate on contemporary antisemitism.

The podcasts for speakers who gave their consent to be recorded are below.

Play: Michael Miller, In Defence of the Nation: Protectionism and Boycotts in Central and Eastern Europe, 1844-1933-Keynote 2

Play: Molly Perry, There Can Be No Friendship': The Contentious Nature of Non-Importation on the American Road to Revolution

Play: Tim Buchen, A More Efficient Strike Than With Bats: Boycott Practice and Discourse in Galicia Prior to WW1

Play: Lori A. Flores, A Blossoming of Red Flags: Cesar Chávez and the United Farm Workers'Lettuce Boycott in California

Play: Cristophe Kreutzmueller, The Ban of Jewish Owned Businesses in Nazi Germany - Was it a Boycott?

Play: John Chalcraft, The BDS Movement and the Question of Horizontalism

Play: Sina Arnold, The BDS Movement and Antisemitism in the United States: A Collision of Frames 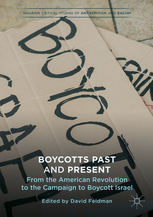