For the last four years there has been an intensified debate—at least in Europe and North America—about the ethics and politics of historical comparison. With the global rise of a populist far-right—and, especially, with the election in 2016 of Donald Trump—many commentators have looked to the troubling past as a way of understanding the threatening present. In particular, references to fascism, concentration camps, and totalitarian dictators from the 1920s and 1930s have flourished. Such analogies have not gone uncontested; rather, a vigorous debate on the pages of blogs, academic journals, and serious journalistic venues such as the New York Review of Books and the New Statesman has unfolded. Sometimes institutions—such as the US Holocaust Memorial Museum—have intervened and prompted further controversies and letter-writing campaigns by intellectuals. Nor has the recent wave of comparison politics been limited to the analogy between today’s far right and the fascist past. As the 2020 controversy around Achille Mbembe in Germany illustrates, there are other nodes in the network of contentious comparisons, not least Israel/Palestine and South Africa.

In this informal talk, Michael Rothberg will offer preliminary reflections on this spate of recent controversies while also situating them in relation to selected earlier disputes. While current controversies are not limited to questions of racism and antisemitism, those two categories are frequently invoked and often at stake in these ongoing debates. Central to this inquiry will be the question: what is the political valence of comparison today?

Michael Rothberg is the 1939 Society Samuel Goetz Chair in Holocaust Studies and Professor of English and Comparative Literature at the University of California, Los Angeles. He is the author of The Implicated Subject: Beyond Victims and Perpetrators, Multidirectional Memory: Remembering the Holocaust in the Age of Decolonization (Stanford University Press, 2019) and Traumatic Realism: The Demands of Holocaust Representation (University of Minnesota Press, 2000). 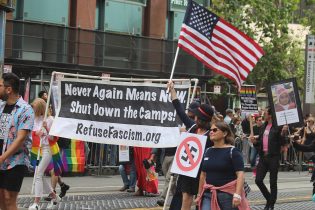