Conspiracy and Antisemitism: Combatting the Protocols of the Elders of Zion 100 Years Ago and Why this Remains Significant Today

In association with The Wiener Holocaust Library

Antisemitism entered the political mainstream in Britain in 1920 when a national newspaper, the Morning Post, published 18 long articles loosely based on the forgery The Protocols of the Elders of Zion. This newspaper series was the most prominent expression of a widespread tendency among conservatives at the time, who repurposed deep-rooted anti-Jewish stereotypes as they reacted to global crisis and the Bolshevik Revolution. The challenge of combatting antisemitism produced significant divisions among Jews who not only disagreed over what the causes of antisemitism were but also argued over whether education or, indeed, anything could help improve matters.

In this lecture David Feldman explores the appeal of conspiracy theory in these postwar years and the responses of British Jews to the threat they faced. He asks how this history can illumine the challenges we face combatting antisemitism today.

David Feldman is Director of the Birkbeck Institute for the Study of Antisemitism and Professor of History at Birkbeck, University of London. He specialises in the history of antisemitism, Jewish history, the history of migration in modern Britain and the history of racialization. David provides expertise and advice on antisemitism to a wide range of political, philanthropic and cultural organisations. His writing on the politics of antisemitism has appeared in The Guardian, Financial Times, Haaretz, History Workshop Online and The Independent.

This lecture is part of the Wiener Holocaust Library’s Fighting Antisemitism from Dreyfus to Today event series.

Image: A depiction of revolution used to illustrate The Cause of World’s Unrest (1920). The book made connections between contemporary revolutions, civil unrest, and the plans for world conquest infamously set out in the forgery, Protocols of the Elders of Zion.

Watch: Conspiracy and Antisemitism: Combatting the Protocols of the Elders of Zion 100 Years Ago and Why this Remains Significant Today 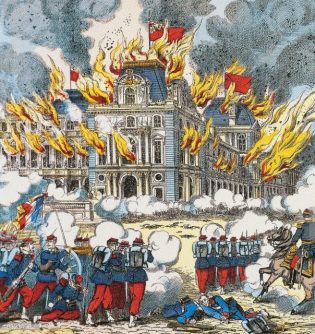