Debating Antisemitism: Why do Jews Disagree so Much?

In this round-table discussion, Diana Pinto, intellectual historian and author who has written widely on Jewish identity in Europe, and Keith Kahn-Harris, writer and sociologist whose recent book explores the debates over Israel among Jews in Britain, join David Feldman, Director of the Pears Institute, to explore the perennial, perplexing question – why do Jews disagree so much on the issue of antisemitism?

What are the different perspectives Jews hold on antisemitism across Europe? How do these perspectives connect to debates about Israel? How are such debates managed? Can dialogue be conducted with civility or is its descent into conflict inevitable? And how do the internal Jewish debates on antisemitism reflect wider societal debates concerned with antisemitism and racism?

Diana Pinto, who lives in Paris, is highly respected for her writing and lecturing on European Jewry and broader transatlantic issues. Her recent publications include: Israel has moved (Harvard University Press, 2013) and ‘Negotiating Jewish Identity in an Antisemtic Age’, Jewish Culture and History (2013), Vol 14, Issue 2-3. Keith Kahn-Harris, based in London, is a regular contributor toThe Guardian, Independent and  New Statesman. His most recent book, Uncivil War, The Israel Conflict in the Jewish Community (David Paul Books) was published earlier this year; he is also co-author of Turbulent Times, The British Jewish Community Today (Continuum, 2010). David Feldman is Director of the Pears Institute for the study of Antisemitism at Birkbeck, University of London. 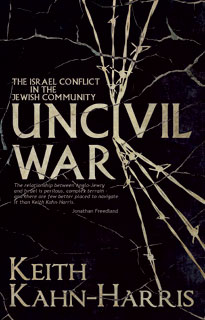