In the upheavals, wars, and revolutions that shaped Central and Eastern Europe in the long nineteenth century, Jews found themselves both as victims of violence and as active participants, fighting for their rights and to reshape the societies in which they lived. They not only appeared as subjects, citizens, patriots, and revolutionaries, but also acted on their own terms.

In this paper Jan Rybak analyses the recurring phenomenon of Jewish armed self-organisation and self-defence, of Jews participating in the violent transformation of the region, guns in hand, fighting simultaneously for their own protection, their emancipation, and for wider society. He argues that these ‘moments’ of Jewish armed self-organisation represent a trajectory of Jewish emancipation and should at the same time bring us to reconsider some of the larger narratives about European modernity and state formation, by centring on the perspective of a marginalised, but armed, minority.

Jan Rybak is an Early Career Fellow at the Birkbeck Institute for the Study of Antisemitism, University of London. He received his PhD from the European University Institute in Florence in 2019. He has previously worked at the University of Salzburg and the University of York and has held fellowships at New York University, POLIN Museum in Warsaw, the University of Haifa, and the Simon Dubnow Institute in Leipzig. His first book, Everyday Zionism in East-Central Europe: Nation-Building in War and Revolution, 1914–1920 was published by Oxford University Press in 2021. 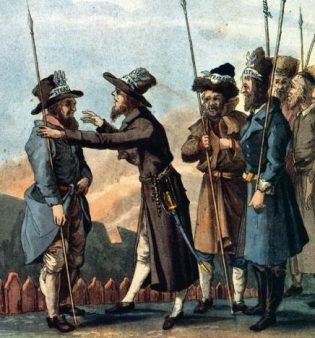