Fighting Together for a Better Past: the Story of Cable Street

75 Years after the event, the Battle of Cable Street maintains its mythical status. Yet it now seems to have a life of its own, interpreted according to social class, political affiliation and cultural background. Was it a Jewish victory? A working class triumph? How was it understood by following generations? And who’s using it now?

Join Professor Tony Kushner and Dr Nadia Valman, co-editors of Remembering Cable Street (Vallentine Mitchell, 2000), and historian David Rosenberg, author of Battle for the East End. Jewish Responses to Fascism in the 1930s (Five Leaves, 2011) as they debate the place Cable Street has taken in our collective memory and its relevance today.

Chaired by Professor David Feldman, Director of the Pears Institute for the study of Antisemitism.

Visit the Jewish Museum website to find out more. 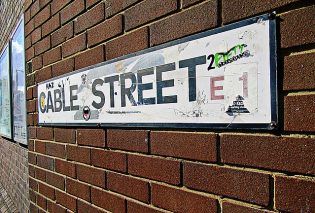