From Berdichev to Minsk and Onward to Moscow: Jewish Voices of the Russian Revolution

The Russian Revolution of 1917 stormed through the cities and towns of the former Pale of Settlement, bringing promises, hopes, enthusiasm and empowerment to millions of Jews. But the Revolution also brought fear and violence. It was this violence, unleashed throughout Russia after the Bolshevik Revolution and into the Civil War of 1918-1921, that ultimately swayed the Jews to support the Bolshevik cause. The pervasiveness, extraordinary brutality, and unprecedented nature of the anti-Jewish pogroms that followed the Revolution shaped the relationship between Jews and the new Bolshevik power, sparking a Soviet Jewish alliance. By exploring the tumultuous events in Berdichev, Minsk and Moscow, three cities located in different regions of the Soviet territory, this talk will capture Jewish responses to the 1917 Revolution, and reassess the role that violence played in the choices Jews made.

Elissa Bemporad is the Jerry and William Ungar Associate Professor of East European Jewish History and the Holocaust at Queens College and the City University New York Graduate Center. She is author of Becoming Soviet Jews: The Bolshevik Experiment in Minsk (Indiana University Press, 2013), winner of the National Jewish Book Award and the Fraenkel Prize in Contemporary History. She is currently finishing a book entitled, Legacy of Blood: Jews, Pogroms, and Ritual Murder in the Lands of the Soviets (Oxford University Press).

Play: Elissa Bemporad - From Berdichev to Minsk and Onward to Moscow: Jewish Voices of the Russian Revolution 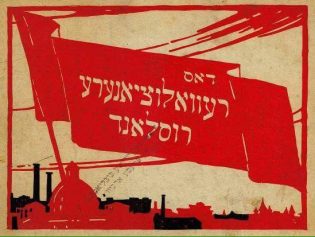