Hiroshima, the Holocaust and the Rise of Global Memory Culture

Jointly hosted by the Pears Institute for the study of Antisemitism and the Comparative Histories of Asia Seminar, Institute of Historical Research

In 1962, a Hiroshima peace delegation and an Auschwitz survivor’s organization exchanged relics and testimonies, including the bones and ashes of Auschwitz victims. This symbolic encounter, in which the dead were literally conscripted in the service of the politics of the living, forms the focal point of Dr Ran Zwigenberg’s new book Hiroshima: the Origins of Global Memory Culture (Cambridge University Press, 2014).

Based on this book, Zwigenberg’s talk will concentrate on the narratives of sacrifice and victimization that were central to the postwar reimagining of the A-bomb survivors as symbols of resistance and as moral authorities in the Japanese and international peace movements; and to the wider connections of this history to that of victims of the Holocaust.

The ‘survivor’, Zwigenberg argues, developed historically as a transnational category that drew on many sources, both within what came to be known as Holocaust discourse and outside of it. The convergence of the histories of Hiroshima and the Holocaust in the late sixties and seventies led to the formation of survivorhood as an expansive, universal category that was used beyond the confines of the two cases of mass-killings. 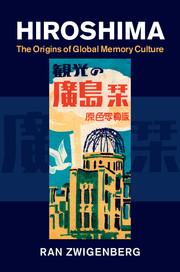