The history of the Jews and of Jewish identity has been characterized by radical inner tensions. These tensions, Professor Steiner suggests, oscillate between priest and prophet, the desert and the city, Zionism and the hopes and ideals of the Diaspora. The Shoah and its legacy have accentuated such divisions. Yet, Steiner argues, the opposing ideals are inextricably interwoven. Is it possible, he asks, to make any responsible conjectures to the future?

George Steiner is a Fellow of Churchill College, University of Cambridge. He has held professorships at Yale, Geneva, New York and Oxford and was elected Fellow of the British Academy in 1998. He is a renowned literary critic, essayist, novelist, scholar and teacher. In his writing he explores comparative literature and the nature and power of language. A further biding concern has been the implication of the Holocaust for our understanding of civilization and culture.

Professor Steiner is a prodigious writer and has published more than 25 books. His non-fiction works include, In Bluebeard’s Castle: Some Notes Towards the Redefinition of Culture (Faber and Faber, 1971) and After Babel:  Aspect of Language and Translation (Oxford University Press, 1975), adapted for television as The Tongues of Men (1977). His fiction includes the controversial novella about Hitler, The Portage to San Cristobel of AH (Faber and Faber, 1981) and Proofs and Three Parables (Faber and Faber, 1992). Most recently he has published My Unwritten Books (Weidenfeld & Nicholson, 2008) and George Steiner at the New Yorker with Robert Boyers (New Directions, 2009). 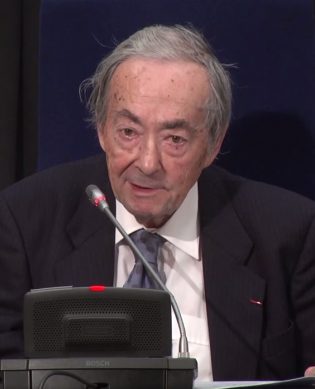