This lecture is one of a series exploring themes from the exhibition, Jews, Money, Myth at the Jewish Museum London (19 March – 17 October), developed in collaboration with the Pears Institute for the study of Antisemitism

Through such vivid literary characters as Shylock, Fagin, and the notorious Jud Süß, the stereotype of the swarthy, hook-nosed, grasping Jewish moneylender has become a staple of western antisemitic discourse.  However, this ugly caricature was a relatively late development.  It was spurred not by actual Jews’ appearances or actions, but by the desire of medieval Christian clerics to warn against the seductions of their suddenly more prosperous world.

In this talk Professor Lipton traces the slowly evolving image of Jews in medieval art, depicted first as worldly and materialistic, and, ultimately, dangerous and demonic.

Sara Lipton is Professor of History, Stony Brook University.  She has been a Fellow at The Metropolitan Museum, Oxford University, and the EHESS (Paris).  Her most recent book is Dark Mirror: The Medieval Origins of Anti-Jewish Iconography (Metropolitan Books, 2014). 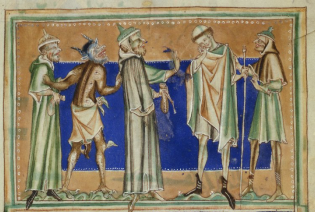