The recent debate on the nature of antisemitism and its definitions has been mainly guided by historians, jurists, philosophers and political theorists. These scholars and public intellectuals mostly follow a deductive path, beginning with one or more normative principles and developing from them a more detailed set of exemplary statements. The role and visibility of the empirical social sciences in this debate has been quite marginal, which constitutes a serious drawback, compromising its completeness and even its relevance.

In this seminar, Sergio DellaPergola will examine the perceptions and experiences of antisemitism following an inductive approach, turning the conventional analyses upside down to focus on the voices and perspectives of the object and victims of hostility and prejudice – the Jews. He will present a new analysis of the findings of the second survey of experiences and perceptions of antisemitism in European Union Member States undertaken in 2018 by the EU Fundamental Rights Agency (FRA). He will pay particular attention to Jews’ perceptions of the content, the channels of transmission, and the perpetrators of antisemitic ideas and actions.

Sergio DellaPergola is Professor Emeritus and former Chairman of The Hebrew University’s A. Harman Research Institute of Contemporary Jewry. He is a specialist on the demography of world Jewry and has published numerous books and monographs and over 300 papers, including Diaspora vs. Homeland: Migration to Israel, 1991-2019 (The Hebrew University of Jerusalem, 2020); Jewish Population and Identity: Concept and Reality, with Uzi Rebhun (Springer, 2018); Jewish Demographic Policies: Population Trends and Options (The Jewish People Policy Institute, 2011); and Israel and Palestine: The Power of Numbers (Società editrice il Mulino, 2008). He was a member of the steering committee of the two FRA surveys on perceptions of discrimination and antisemitism in European Union Member States in 2012 and 2018. Winner of the Michael Landau Prize for Demography and Migration (2013) and the Marshall Sklare Award for distinguished achievement by the Association for the Social Scientific Study of Jewry (1999). 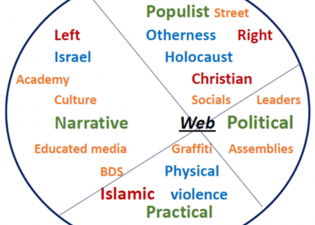