Literature, Immigration, and Diaspora in Fin de Siècle England: A Cultural History of the 1905 Aliens Act

The 1905 Aliens Act was the first modern law to restrict immigration to Britain. David Glover’s new book, Literature, Immigration, and Diaspora in Fin de Siècle England: A Cultural History of the 1905 Aliens Act asks how it was possible for Britain – a nation that had prided itself on offering asylum to refugees – to pass such legislation.

Glover argues that the literary and popular entertainments at the turn of the century perpetuated a culture of xenophobia, evidenced in the ways that the legal notion of the ‘alien’ became a national-racist epithet indistinguishable from the figure of ‘the Jew’. Reconstructing ‘the alien question’ Glover examines the work of George Eliot, Israel Zangwill, Rudyard Kipling and Joseph Conrad among others. Linking these figures to the beliefs and ideologies that circulated at the time, Glover sheds new light on dilemmas about borders, nationality and citizenship – issues that were as troubling a century ago as they are today.

Taking his book as the starting point, David Glover is joined in this round-table discussion by Bill Schwarz and Sonya Rose to explore the figure of the ‘alien’ in late Victorian and Edwardian culture, the growing debate on race and national identities at the fin de siècle and to discuss the complex inter-relationships between literature and history. 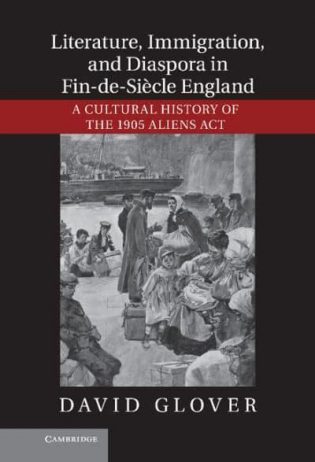