Holocaust Memorial Lecture in collaboration with the Institute of Historical Research

Forty years after the first edition of Martin Gilbert’s Atlas of the Holocaust was published, Professor Cole examines four decades of mapping the Holocaust in the analogue and digital age. In part he asks how the Holocaust has been mapped and whether this reveals anything new about this event. But he also poses a broader question. Why should historians and the wider public concern themselves with mapping the past? What role might visualising the places and spaces of the past have as we remember and memorialise the Holocaust, as we write its history, and for historical practice in general?

Tim Cole is Professor of Social History at the University of Bristol and Director of the Brigstow Institute which fosters interdisciplinary research on what it means to be human in the 21st century. His research ranges widely across social, landscape and environmental histories and digital humanities with a focus on the Holocaust and how it is remembered. His books include Holocaust Landscapes (Bloomsbury Publishing, 2016); Traces of the Holocaust (Bloomsbury Publishing, 2011); and a co-edited collection of essays, arising from a research project he co-led, Geographies of the Holocaust (Indiana University Press, 2014). 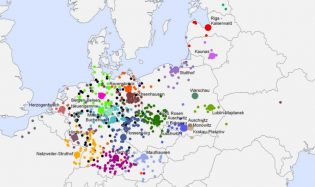 Geographies of the Holocaust

Map of SS-designated concentration camps and subcamps, 1933–1945. Each large dot represents the main camp with the smaller dots referencing subcamps.