In partnership with the Leo Baeck Institute London

In Germany, until this year, it was illegal to print copies of Adolf Hitler’s Mein Kampf. The State of Bavaria held the copyright and banned publication of the book. In January 2016 the copyright expired and the Institute for Contemporary History in Munich published a scholarly edition which runs to two enormous volumes, complete with a lengthy introduction and copious annotation. The first print run was sold out before the publication date. In the UK, by contrast, Nazi literature is freely available and, unlike in Germany and Austria, there is no law against Holocaust denial. These events and the disparity between German and UK practice raise significant and intriguing questions. Does it make sense to ban Nazi literature in Germany today? Why was the annotated edition produced? Who in actuality are the readers? In the UK, should we regard Nazi effusions as an irritant that arises from invaluable freedoms or as an abuse that should be stopped?

David Aaronovitch is a columnist and broadcaster; he writes for The Times and Jewish Chronicle, presents BBC Radio 4’s news programme, The Briefing Room, and has written on the role of conspiracy theories in shaping modern history. Neil Gregor is a Professor of Modern European History, he has written extensively on twentieth century German history and the history of the Third Reich and recently (in German) on Mein Kampf: ‘”Mein Kampf” lesen, 70 Jahre später’. Maiken Umbach is a Professor of Modern History and an expert on National Socialism, in particular its emotional and personal history, and on amateur photography in the Third Reich. Click here to read her piece on how ideology does, and doesn’t work, in Hitler’s Mein Kampf. 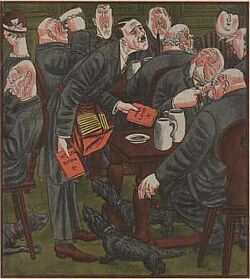 From the satirical weekly Simplicissimus, 31st August 1925 (in Bavarian dialect): "The booklet costs twelve Marks? A little expensive, neighbour... You don't have any matches by chance?"