Muslims and Jews in France: History of a Conflict

Professor Mandel will speak about the global, national and local origins of the conflict that has long shadowed Muslim-Jewish relations in France, challenging the belief that rising antisemitism in France is rooted solely in the unfolding crisis in Israel and Palestine.

Professor Mandel demonstrates that although antisemitic violence began capturing international attention in 2000, Muslim-Jewish tensions were, in fact, the subject of commentary much earlier in the century, as a diverse range of social actors, including international Jewish representatives, anti-Zionist Algerian nationalists, French police, and Jewish and Muslim student activists began to fear that Middle Eastern conflict was coming to France. She argues, however, that focusing solely on the Middle East in an effort to understand Muslim-Jewish politics in France misses key aspects of the story. While global developments created fault lines around which activists began to mobilize, the nature of that mobilization,  and the success or failure of the political rhetoric employed, emerged from French political transformations. Furthermore, as a charged narrative of polarization took hold, it often obscured a more complex inter-ethnic reality.

Maud Mandel is Professor of Judaic Studies and History and Director of the Programme in Judaic Studies at Brown University. Her research focuses on the impact of policies and practices of inclusion and exclusion on ethnic and religious minorities in twentieth-century France, most notably Jews, Armenians and Muslim North Africans. She is the author of Muslims and Jews in France: History of a Conflict (Princeton University Press,  2014) and In the Aftermath of Genocide: Armenians and Jews in Twentieth-Century France (Duke University Press, 2003)

Play: Professor Maud Mandel - Muslims and Jews in France: History of a Conflict 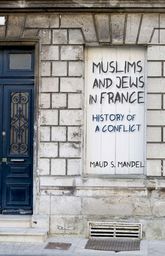