The mid-1920s brought stability to Poland and sped the assimilation of its three million Jews. But already in the late 1920s, many began to believe that there was little prospect of a decent future for Europe’s largest Jewish community. Economic crisis fed this outlook but so too did newly confident antisemitism and the flourishing of political pathologies across liberal Europe.

In this lecture, Professor Moss explores how intellectuals and ordinary people confronted this crisis of their future. Looking beyond familiar histories of Zionism and Diasporism, he examines how analysts in both movements groped toward new understandings of the powers and trajectories of illiberal politics, nationalism, and antisemitism. Kenneth Moss recaptures a world of Jewish thought and politics defined less by ideological certainties than by felt danger and acknowledged incapacity. This is part of the unfinished global history of progressivism’s halting effort to comprehend the unexpected power of enmity-politics and of the special predicaments faced by minority communities and individuals who live in its shadow. 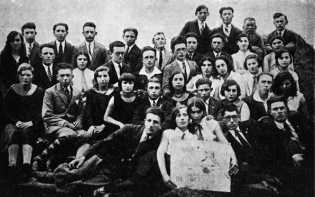 A group of Frayhayt comrades in 1931