New Histories of Racialization and Resistance – a Conversation

How we memorialise and study the past is being questioned today in new ways. The global reverberations of the Black Lives Matter protests of the summer of 2020 and the growing demands to ‘decolonise’ knowledge from within and without higher education challenges anyone who seeks to engage with a contentious present and troubling past, and to consider its implications for us as teachers, students and political beings.

Responding to this moment, and mindful of our overlapping commitments to traditions of radical and politically engaged history, the Department of History, Classics and Archaeology, the Birkbeck Institute for the Study of Antisemitism and the Raphael Samuel History Centre have committed to an annual event to explore and reflect on histories of racism, racialization, and resistance. We have framed this inaugural event as a “conversation” because we are especially keen to bring into dialogue multiple perspectives on these histories.

The conversation between the three speakers will be chaired by David Feldman, Director, Birkbeck Institute for the Study of Antisemitism. The audience will have the opportunity to join the conversation in the Q&A that follows.

Jacob Dlamini is an author, field guide and an Assistant Professor of History at Princeton University. His first book, Native Nostalgia (Princeton University, 2009), reflected on his own childhood under apartheid and his second book, Askari, won the 2015 Alan Paton Award for best South African non-fiction. In 2020, Dlamini published two books: Safari Nation: A Social History of the Kruger National Park and The Terrorist Album: Apartheid’s Insurgents, Collaborators, and the Security Police.

Sadia Qureshi is a historian of racism, science and empire and a Senior Lecturer at the University of Birmingham. Her ﬁrst book, Peoples on Parade (University of Chicago Press, 2011) explored the importance of displayed peoples for the emergence of anthropology. She also co-chairs the Royal Historical Society’s Race, Ethnicity & Equality Working Group, which produced the Society’s landmark report on racial inequalities in 2018.

Kristy Warren researches the social and political history of British colonialism in the Caribbean and the lingering legacies of this past in the region and wider diaspora. She is currently a Research Associate at the University of Leicester working on an ESRC–funded project, in collaboration with the University of Guyana, entitled ‘Mental, Neurological and Substance Abuse Disorders in Guyana’s Jails 1825 to the present day’.

Play: New Histories of Racialization and Resistance – a Conversation 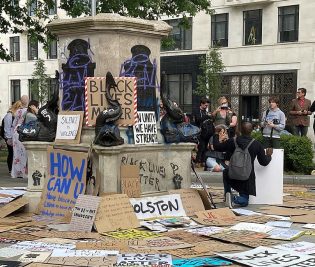