No Englishman did it: Jews, the News, and the Whitechapel Murders of 1888

Few London-based figures have stimulated as much morbid fascination as Jack the Ripper. Media events surrounding the Whitechapel murders from 1888 to 1891, and the profusion of sensational literature that grew out of these events, point to the potency of the notion of an unknown fiend lurking the streets among immigrants, misfits, and the dispossessed.

In this lecture, Mia Spiro looks at popular suspicions that Jack the Ripper was a Jewish migrant and the reactions to these accusations among Jews.  By looking at contemporary reportage in newspapers such as The Star, as well as the Jewish press, we will see how readers and writers used print media to draw attention to the boundaries between ‘Englishman’ and foreigner, fact and fiction, and the limits of religious certitude in the face of inexplicable evil.

Mia Spiro is Senior Lecturer in Modern Jewish Culture and Holocaust Studies and Head of Theology and Religious Studies at the University of Glasgow. She is the author of Anti-Nazi Modernism: The Challenges of Resistance in 1930s Fiction (Northwestern UP, 2013) and has published on Jewish representation in literature and film and the impact of the Holocaust on post-WWII Jewish culture. She is currently writing a book entitled: ‘Monsters and Jewish Migration: Golems, Dybbuks, and the Ghosts of War’ (to be published in 2024).

Play - No Englishman did it: Jews, the News, and the Whitechapel Murders of 1888 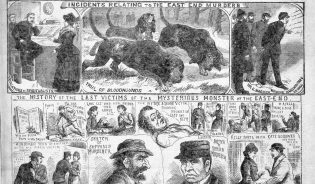 Sketches of the Whitechapel murderer, "The Illustrated Police News", 20 October 1888