The Pears Institute has decided to postpone the Jew/Jud Süss screening, in the light of the coronovirus/COVID-19 outbreak.

We hope to reschedule the screening for late autumn/winter 2020.  We hope your piece can be held over until this time.

This double bill of two rarely-screened films, produced in the era of Nazi power promises to be a thought-provoking and troubling event. A panel discussion about both films will follow the screening.

Jew Süss (1934), produced in Britain, was directed by Lothar Mendes and starred Conrad Veidt – both Germans who left the country shortly after the Nazis won power in 1933. It was an adaptation of the 1925 novel by Lion Feuchtwanger, about a wealthy Jew’s rise to power in eighteenth century Germany, driven by his hope of bettering the life of all Jews. The film was intended as a clear rebuke to Nazi antisemitism and to draw attention to Nazi atrocities, although arguably it is also troubling in its representation of Jews.

Jud Süss (1940) directed by Veit Harlan, was one of the most successful pieces of antisemitic film propaganda produced in Nazi Germany. Jud Süss was launched at the Venice Film Festival in September 1940 to great acclaim, receiving the ‘Golden Lion’ award. The film was a success at the box office, seen by some 20 million people across Germany and Europe, and became required viewing for all members of the SS.

The Pears Institute has been granted special permission by the German Federal Foreign Office to screen Jud Süss, with the kind agreement of the Friedrich-Wilhelm-Murnau-Stiftung. The film will be shown with English subtitles.

About the panel speakers: Erica Carter is Professor of German and Film, King’s College London and Chair of the German Screen Studies Network. Dr Daniel Wildmann is a historian and film scholar specialising in German-Jewish history. He is Director of the Leo Baeck Institute London and a senior lecturer at Queen Mary, University of London. Chair: Professor David Feldman, Pears Institute for the study of Antisemitism, Birkbeck, University of London.

Please note: please arrive in good time – for safety reasons latecomers cannot be admitted. This is because the screening is being shown in a lecture theatre, not a cinema. The lecture theatre is not equipped to accept latecomers once the film has begun and the lights are down. 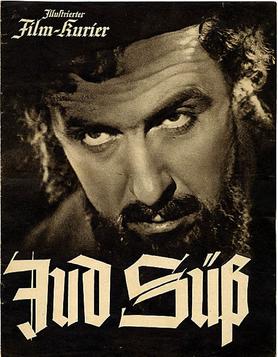