In this seminar Nancy Sinkoff will explore how the life of Lucy S. Dawidowicz provides a window on to the major events and questions that shaped Jewish life in the twentieth century. Dawidowicz, a pioneer American historian in the field that is now called Holocaust studies, was a household name in the postwar years, not only because of her scholarship but also due to her political views. Like many other New York intellectuals, she was a youthful leftist, became an FDR democrat in mid-century, and later championed neoconservatism. Dawidowicz’s right-wing politics, her gender, and unabashed commitment to Jewish particularism in an East European Jewish key have resulted in scholarly neglect. Nancy Sinkoff argues that Dawidowicz’s rightward shift emerged out of living in prewar Poland, watching the Holocaust unfold from New York City, and working with displaced persons in postwar Germany.

Nancy Sinkoff is the Academic Director of the Bildner Center for the Study of Jewish Life and Associate Professor of Jewish Studies and History at Rutgers, New Brunswick. She specializes in early modern and modern Jewish history, East European Jewish intellectual history, the Enlightenment, politics, and gender. She is author, most recently, of From Left to Right: Lucy S. Dawidowicz, the New York Intellectuals, and the Politics of Jewish History (Wayne State University Press, 2020) and the co-edited volume (with Rebecca Cypess), Sara Levy’s World: Gender, Judaism, and the Bach Tradition in Enlightenment Berlin (University of Rochester Press, 2018), winner of the outstanding book prize from the Jewish Studies and Music Study Group of the American Musicological Society. 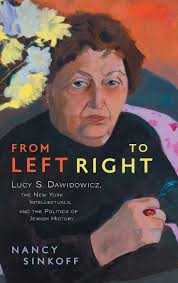