Holocaust Memorial Day Event - Pears Institute for the study of Antisemitism in collaboration with the Institute for Historical Research, supported by the Department of History, Classics and Archaeology, Birkbeck, University of London

In this lecture, Professor Grossmann addresses a transnational Holocaust story that remarkably – despite several decades of intensive scholarly and public attention to the history and memory of the Shoah – has remained essentially untold, marginalized in both historiography and commemoration.

The majority of the c.250,000 Jews who constituted the “saved remnant” (She’erit Hapleta) of East European Jewry, gathered in Allied Displaced Persons camps, survived because they had been “deported to life” in the Soviet Union. Moreover, Iran became a central site for Jewish relief efforts as well as a crucial transit stop for the Polish Army in Exile; while thousands of Jewish refugees, “enemy alien” as well as allied Jewish refugees in British India, worked with the Jewish Relief Association in Bombay.

Professor Grossmann seeks to integrate these largely unexamined experiences and lost memories of displacement and trauma into our understanding of the Shoah, and to remap the landscape of persecution, survival, relief and rescue during and after World War II.  She also asks how this “Asiatic” experience shaped definitions (and self-definitions) as “survivors” in the immediate postwar context of displacement and up to the present globalization of Holocaust memory.

Atina Grossmann is Professor of Modern European and German History and Women’s and Gender Studies at The Cooper Union, New York. A renowned, prize-winning historian, she has held fellowships from the National Endowment for the Humanities, German Marshall Fund, American Council of Learned Societies, Institute for Advanced Study in Princeton, the American Academy, Berlin, and has a fellowship at the Davis Center, Princeton University in 2015. She has also held Guest Professorships at the Humboldt University Berlin and the Friedrich Schiller University in Jena. Her recent books include the award-winning Jews, Germans, and Allies: Close Encounters in Occupied Germany (Princeton University Press, 2007) awarded the Fraenkel Prize in Contemporary History from the Wiener Library, London and the George L. Mosse Prize,  American Historical Association; and After the Nazi Racial State: Difference and Democracy in Germany and Europe (2009). 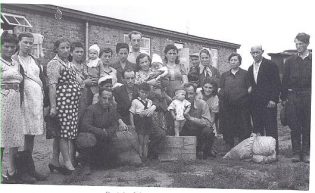