The Archive Thief: The Man Who Salvaged French Jewish History in the Wake of the Holocaust

Zosa Szajkowski, a Polish-born Jewish historian, took tens of thousands of Jewish documents from Europe in the 1940s and 50s and moved them, illicitly, to New York. He eventually sold them to Jewish research libraries, where they still remain today. Was this a heroic act of salvage or simply theft? To answer this question, Lisa Leff explores the shifting contours of Jewish nationalist ideas in the mid-twentieth century, and grapples with the vexing problem of where the material remnants of the Jewish past are best kept.

Lisa Moses Leff is Professor of History at American University in Washington, D.C. Her research focuses on Jews in nineteenth and twentieth century France. She is author of Sacred Bonds of Solidarity: The Rise of Jewish Internationalism in 19th Century France (Stanford University Press, 2006) as well as the book upon which the present talk is based, The Archive Thief (Oxford University Press, 2015). The Archive Thief was a finalist for a National Jewish Book Award and the winner of the Sami Rohr Prize for Jewish Literature.

Play: Lisa Leff, American University - The Archive Thief: The Man Who Salvaged French Jewish History in the Wake of the Holocaust 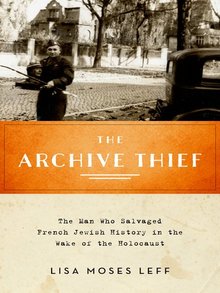