The City Without Jews

Nearly a decade before the rise of Nazi Germany, the Austrian film, Die Stadt ohne Juden – The City Without Jews,  envisions a chilling dystopia. Amidst soaring inflation and a deep economic crisis, the government hits upon an easy scapegoat that garners popular support – ‘expel the Jews!’.

The citizens of ‘Utopia’ (Vienna) celebrate the departure of the city’s Jewish population. However, without its Jews, Utopia falters: coffee shops fall empty or are converted  into beer halls, theatres offer little entertainment, and the city’s cultural life wanes. Worse still, international trade declines and rates of inflation and unemployment rise exponentially. Posters appear around the city, ‘You’ve thrown out our prosperity with the Jews’.

Based on the novel of the same title by Jewish writer Hugo Bettauer, this silent film, premiered in 1924, satirises the rising antisemitism in Austrian society in the wake of the First World War. The film ridicules the hollow promises of nationalist utopias and the pernicious nature of antisemitic demagoguery. It is a powerful and prophetic exploration of the precarious place of Jews in 20th-century Central European culture and economy, and the fertile ground that economic crises provide for racism and bigotry.

This screening features the original version of the film, rediscovered and digitally restored in 2017 after being ‘lost’ for 90 years. A discussion will follow the screening.

This film is being shown in a lecture theatre, not a cinema. The lecture theatre is not equipped to accept latecomers once the film has begun and the lights are down. For safety reasons, therefore, latecomers cannot be admitted. Please arrive in good time.

This film screening and panel discussion is one of a series exploring themes from the exhibition, Jews, Money, Myth at the Jewish Museum London (19 March – 7 July), developed in collaboration with the Pears Institute for the study of Antisemitism. 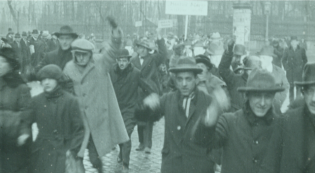