The Civic Gospel and Images of Islam: Race, Religion and Difference on Display at Birmingham Museum and Art Gallery, c.1885

William Müller’s 1843 Prayers in the Desert is widely referred to as the first British painting to show Muslims at prayer, and it was undoubtedly one of the earliest to do so. From 1885, it was proudly on display in Birmingham’s non-conformist led Art Gallery, jostling for attention in this major civic space with images of Jews, Catholics, Lutherans and Unitarians. The late nineteenth-century innovation of public civic art galleries and museums in regional towns and cities became a new and significant context for the display and mass viewing of images, but the religious valences of these settings remain underexplored. In this paper, Kate Nichols will explore what Prayers in the Desert might tell us about Victorian understandings of Islam, and how the display of this painting created dialogues about race, religion and difference in the supposedly secular context of the museum.

Kate Nichols is an art historian. Her first book, Greece and Rome at the Crystal Palace, Classical Sculpture and Modern Britain was published in 2015 (Oxford University Press); she is co-editor of Art vs Industry: New perspectives on visual and industrial cultures in nineteenth-century Britain and After 1851: The Material and Visual Cultures of the Crystal Palace at Sydenham. This paper is part of a new project examining the connections between culture, manufacturing and empire in nineteenth-century Birmingham.

We apologise that this seminar is being held on a Friday evening. In the spring term the seminars will be held on a Tuesday.

This seminar is one in the series, Race, Religion and Difference in the Nineteenth Century, a collaboration between Birkbeck Institute for the Study of Antisemitism, University of London and the Centre for Nineteenth Century Studies at Durham/Newcastle and Northumbria Universities.

Play: The Civic Gospel and Images of Islam: Race, Religion and Difference on Display at Birmingham Museum and Art Gallery, c.1885 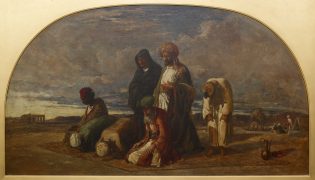