Rarely screened in the UK, Aleksandr Askoldov’s The Commissar (1967) is regarded as one of the most important films of the Soviet era, yet it was banned for over 20 years.

Based on a short story by Russian Jewish writer Vasilii Grossman, the film chronicles the dramatic journey of Klavdia Vavilova, a pregnant Red Army commissar during the Russian Revolution. As the birth of her child reaches ever nearer, the committed commissar is forced to stay with a Jewish family near the frontline between the Red and White Armies. Here she faces the hardest choice of her life – return to her unit, casting aside motherhood for revolutionary martyrdom, or stay with her new-born son and run the risk of enduring the persecution and pogromist violence directed at her Jewish guardians.

Originally scheduled for release in 1967 to mark the 50th anniversary of the Russian Revolution, Askoldov’s first and only film was shelved by the censors due to its frank portrayal of antisemitism. Askoldov was in turn expelled from the Communist Party and banned from making films for life.

In the panel discussion speakers will explore issues the film raises about both antisemitism and gender in the Russian Revolution. How is antisemitism represented and why did this prove so controversial to the Soviet authorities? In what ways did the film’s intended release during the Six Day War of 1967 shape its reception? How is gender and Soviet womanhood depicted in the film? And how does The Commissar compare with other representations of the Holocaust and gender in Soviet cinema? Chair: Dr Brendan McGeever, Acting Associate Director of the Pears Institute for the study of Antisemitism.

About the panel speakers: Marat Grinberg is a scholar of Russian and Soviet literature and cinema and author of Aleksandr Askoldov The Commissar (Intellect, 2016), a book-length study of the film; Jeremy Hicks is an expert on the Holocaust in Soviet Cinema; and Rachel Morley is a specialist on gender in early Russian cinema. 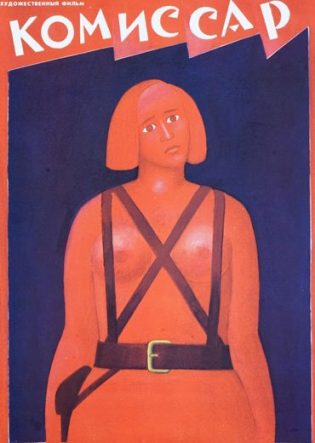