The Passion Play at Oberammergau, Germany is one of the world’s longest running dramatic performances. Staged regularly by hundreds of villagers since at least 1634, this amateur play became a renowned spectacle by the end of the nineteenth century, charming everybody from Thomas Cook tourists to European royals and American industrialists. In the late twentieth century, however, Oberammergau became just as well-known for its markedly anti-Jewish rendering of the passion, which pitted a vengeful conspiracy of rabbis and traders against a handsome and beatific Jesus.

Returning to the decades when Oberammergau first rose to global fame, Dr Priest will ask to what extent the play’s negative portrayal of the Jews was an innovation and a product of its modernisation, rather than tradition. Exploring Oberammergau’s Passion Play through the eyes of its first Jewish visitors – from Britain, France, Germany and the United States – he will show how and why audiences first accused the play of antisemitism, as well as why these criticisms failed to dent Oberammergau’s ascent as a cultural phenomenon.

Dr Robert Priest is Senior Lecturer in Modern European History at Royal Holloway, University of London. He has published widely on the cultural and intellectual history of nineteenth-century Europe, with a particular focus on religion, race and secularisation. 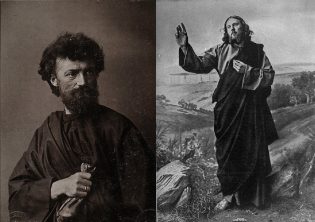