Unindicted Co-Conspirators: White Jews on the Periphery of Black Power

Jewish activists were a conspicuous presence in the U.S. New Left of the 1960s. Yet in contrast to the large and influential Jewish Left that preceded the Second World War, Jews in the U.S. New Left rarely presented themselves as a collective force. Postwar Jewish radicals came of age in the wake of the Red Scare, when much of the historic working-class ethnic base of Jewish activism was being rapidly incorporated into America’s white middle class. While some Jewish radicals had never been defined as white – and continued to be excluded – America’s increasingly homogeneous postwar Jewish communities left even white secular, internationalist Jews ill at ease.

As these Jews embraced universalist social justice efforts in the 1960s, many of them continued to feel deep personal connections to Jewishness. With notable exceptions, however – such as Abbie Hoffman and his Jewishly-inflected political theatre – they tended to express these sentiments privately. The outlines of a collective identity become clearer when we look at patterns in Jewish New Leftists’ lives. This paper looks at one subset of activists: white Jews who built their lives in intimate connection to Black liberation and anti-colonial resistance movements. For these white Jews, work to support Black Power and anti-colonial movements was both a necessary act of solidarity and a personal expression of the search for a political and cultural home. We will look at memoirs, oral histories and press accounts of white Jews on the New Left to unpack the factors that muted radical Jewish public identity, to ask what the consequences of this might have been, and to reconsider these white activists’ choices as a collective Jewish phenomenon.

April Rosenblum (she/her) is a Jewish writer who studies race, class, Jewish identity and movement building in the 20th century. Her essays have been featured in The Washington Post, Haaretz and Jewish Currents. Her graduate research on Black/Jewish interconnection emerges out of her experience as a white Jewish child of radicals raised in a Black community. Her most well-known work, the Left manual on antisemitism The Past Didn’t Go Anywhere (2007), was influential in shaping the consciousness of many activists who have helped to lead Jewish resistance in the Trump era. 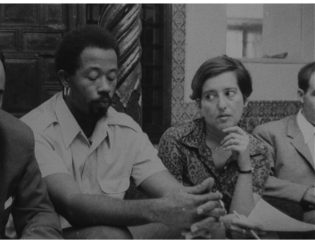